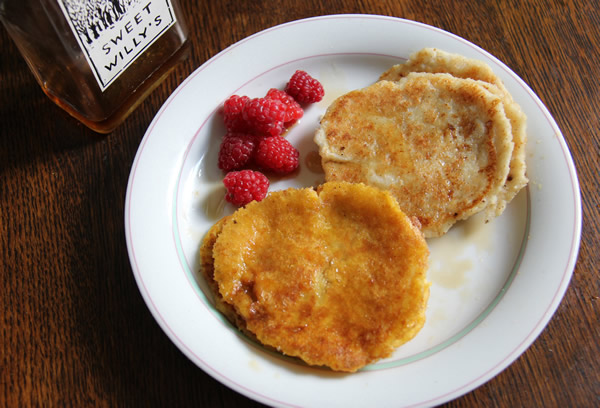 A spoonful of corn meal mush gets griddled until it’s crispy outside yet still soft and creamy inside. There’s nothing but corn flavor through and through—except of course for the tang of the maple syrup it happily soaks up.

Etymologists say johnny cakes evolved from journey cakes because early settlers packed them for trips. Seriously? These fragile cakes can break on the way from the stove to the table.

I did learn that jonakin is an early American name for this pancake, and perhaps it was just a short jump from there to johnny cake.

My mom discovered johnny cakes on a tour of Kenyon’s Grist Mill, Rhode Island’s oldest manufacturing business, famous for grinding meals and flours since about 1700. Using the recipe on the back of the box of Kenyon’s Stone Ground Johnny Cake White Corn Meal, she griddled up what I thought were some of her best pancakes—and certainly her most memorable.

Kenyon’s claims its heirloom white Indian corn, also called flint corn, is “the original and only corn meal that you will find that will make a real Rhode Island johnny cake.” I took this seriously, and fortunately found Kenyon’s at my local Stop and Shop.

I’ve noticed that Kenyon’s corn meal is now hard to find. They sell it online, but it’s pricey: $24.50 for 32 ounces including shipping. At that price, it should come with a Certificate of Authenticity.

What are we to do now? Can we successfully substitute easy-to-find yellow corn meal for the official white?

Surprisingly, in a blind taste test we found that yellow corn meal made not just adequate, but superior johnny cakes. A slightly coarser grind than its white counterpart, it fried up just a little crispier, produced thinner pancakes, and cooked a bit faster. Best of all, the yellow johnny cakes had deeper, sweeter corn flavor.

This means that for less than a tenth of the price of Kenyon’s corn meal shipped from Rhode Island, you can make delicious, perfectly authentic johnny cakes for your next Sunday brunch. Despite what Kenyon’s says, johnny cakes do come in yellow as well as white.

So give these a try and get an idea of how the Native Americans hooked colonists on corn. Native Americans also cooked up maple syrup, so make sure you’ve got the real thing on hand to get the full Rhode Island johnny cake experience.

P.S. I couldn’t find Kenyon’s corn meal in stores, so I called the company and spoke with the owner. He said he’d send me some for my story, and I got excited that Recipephany might finally get a freebie. When the box arrived, though, I found an invoice for $24.50 tucked beside the corn meal. I gladly paid it, relieved that I wouldn’t feel obliged to give them special consideration. Rest assured, Recipephany remains outside the pockets of Big Corn Meal.

1.    Mix corn meal, sugar and salt in a bowl.
2.    Gradually add boiling water, mixing well to combine, and let sit for about 5 minutes.
3.    Add ½ cup milk and stir well. (Add more if desired. A thinner batter makes for a thinner and lacier johnny cake.)
4.    Drop batter by spoonfuls onto a well greased, medium hot griddle or skillet.
5.    If using white corn meal, let sit for 6 minutes, or until they have turned brown around the edges. With yellow corn meal, they need to sit for only about 4 minutes.
6.    Place a little oil or butter on each cake, then flip them over and press down slightly with a spatula to flatten. Cook for about 5 minutes more (a little less with yellow corn meal), pressing down as needed to keep them thin.
7.    Serve with maple syrup on top or for dipping. 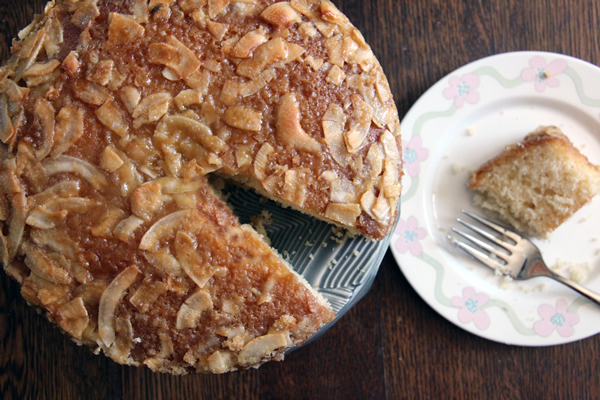 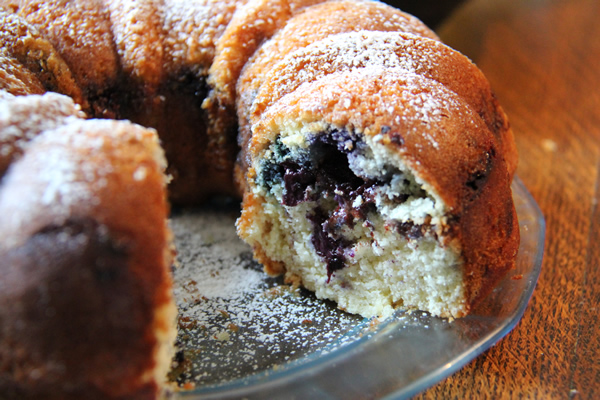 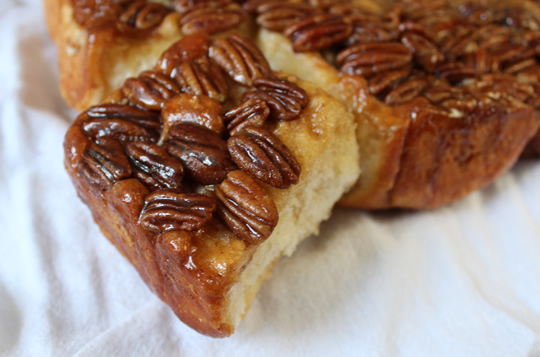