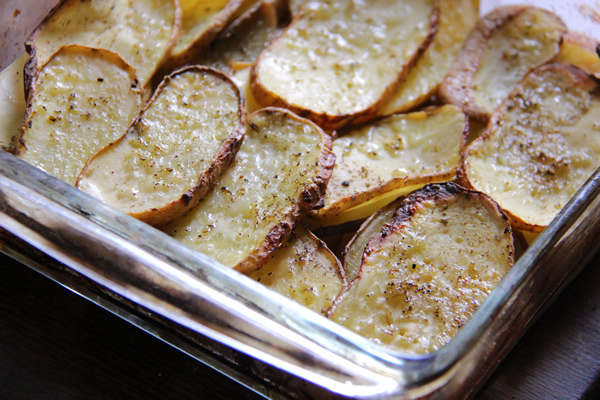 You’re low on flour, rice is scarce, and your pasta stash is down to one lonely box of elbows. Thank Heaven for potatoes. Especially when it’s easy to dress them up Greek-style—bright, pungent and with an aroma so intoxicating it could serve as stress-relief therapy.

“Greek-style” is simply shorthand for “lemon, oregano and olive oil” (the way “Florentine” means spinach). But this is not your standard dish of crispy potato wedges done up Greek-style. Here, layers of thinly sliced potatoes roast and steam, soaking up caramelized lemon sauce and blissing out on oregano. Cut into the casserole and you’ll find strata of textures and flavors, from soft and creamy on the bottom to crispy on top. Imagine Mediterranean, dairy-free scalloped potatoes.

This is yet another treasured recipe from Elinor Lipman. It dates back to our two years’ rooming together after college, before she took up writing best-selling fiction and before I set up Brody Marketing’s world headquarters in my bedroom.

“The recipe was from some international cookbook, a paperback I no longer have,” she says, so the provenance remains a mystery. It is still a favorite for both of us. Confident of its ease and lusciousness, I entered it into a cooking contest—with Elinor’s permission, of course. I christened it “Patates Elinora” in homage. It didn’t win, but the name stuck.

Use whatever potatoes you have on hand—russets, Yukon Golds, and I suppose even purples. Just watch out—this might upstage the rest of your meal. 2. Wash and pat dry 4 large potatoes (or equivalent smaller ones). Slice thinly length-wise (no need to peel). Oil or butter a casserole dish. Put one layer of potato slices on bottom. Sprinkle with salt, pepper and oregano.

3. Repeat layering and seasoning until one more layer of potatoes remains.

5. Bake, covered, in 375-degree oven until potatoes are tender, about an hour. Insert fork to check for doneness during cooking.

6. Uncover casserole to crisp the top layer, for about 15 minutes or until it reaches desired golden color. 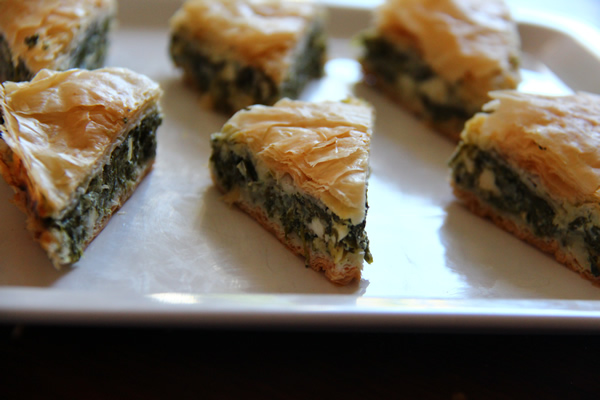