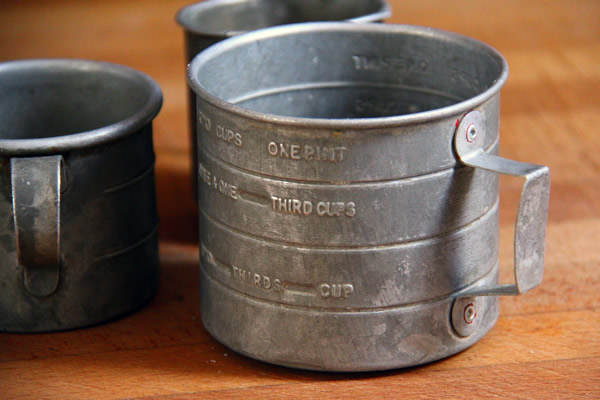 A great substitution can be a lifesaver. But imagine a substitute even better than the original.

Here are 10 Substitutions—in no particular order—that qualify as recipephanies because they are easy to keep on hand and can save money, shelf space, waste, and even work. They’re so successful, we’ve made many of them permanent replacements in our recipes.

Bars of baking chocolate are now half their original size but the price has stayed about the same. Unsweetened cocoa powder remains both more economical and versatile. Most cake and cookie recipes call for cocoa, so it’s already a pantry staple. By adding a touch more for good measure, cocoa can create a more intense, darker chocolate, as in our Quick and Creamy Chocolate Pudding. And there’s no need to melt or risk burning the chocolate.

Commercial brown sugar is nothing more than white sugar with added molasses. Since molasses is a pantry staple for cookies, gingerbread, barbecue sauces, and even some Asian foods, it’s ready to add into any dish calling for brown sugar. Drizzle in a little extra to dial up that delicious, complex smoky taste. And no more dealing with clumped or hardened brown sugar.

Fresh sugar pumpkins probably makes the best pies. But they vary in flavor and quality, and we prefer not to deal with all those seeds. Same with other types of squash. So we usually rely on canned pumpkin for convenience and consistency.

But there’s a tastier alternative that’s almost as easy as opening a can: sweet potato. Cooked sweet potatoes or yams soak up the spices and make a heavenly “pumpkin pie.” Yes, it’s technically sweet potato pie, but it will easily pass for pumpkin.

Sweet potato could probably also stand in for pumpkin in quick breads and pancakes. We can’t imagine “sweet potato spice” will ever become a thing, though.

2 cups mashed pumpkin for one pie = 2 cups mashed, cooked and peeled sweet potatoes or yams, or to taste

Ok, so now you’ve got sweet potatoes to make “pumpkin pie,” but no can of evaporated milk (not to be confused with sweetened condensed milk). Evaporated milk has 60 percent less water than regular milk, so it’s thick and sweet. But chances are you already have another, more versatile kind of “evaporated milk”: nonfat dry milk.

Every pantry should have dry milk as a handy substitute for fresh milk in baked goods, puddings and white sauces. Stir in less water than for regular milk, and dry milk matches the thickness and flavor of evaporated milk. A box of dry milk packets can replace many cans of evaporated milk, and you mix only what you need.

Recipes often specify unsalted butter because—well, we’re not sure why. It used to be easier to tell if butter had gone bad if it had no salt to cover up any rancid taste. Today all butter is fresh. We’ve found that salted butter works just as well as unsalted butter in any recipe we’ve tried, including croissants. While salt adds flavor for butter as a spread, in baking and cooking it seems to make no difference in taste or performance.

If you want to cut back on salt, just subtract 1/4 teaspoon for every half-cup stick in the recipe. So use whatever type of butter you have on hand. And if you prefer unsalted butter for everything, so much the better.

We’ll get into trouble for this, but here goes. Margarine.

It’s not your grandmother’s margarine, since there are no longer any significant amounts of transfats. Imperial margarine (the brand we use) claims it has about a third fewer calories, about a third less fat, and about two-thirds less cholesterol than butter. Cutting back on fat and calories seems like a good thing. And margarine costs less than a third of store-brand butter.

But the real selling point is how it makes cakes so light and delicious. Because it is softer than butter, it creams more easily. Try it in Jordan Marsh Blueberry Muffin Cake, Julia Lipman’s Cinnamon Tea Cake, and in La La Land O Lakes Old-World Raspberry Bars, a recipe devised for butter. We’ve even had success in King Arthur Flour Chewy Whole Wheat Brownies, about as rich-tasting as they come.

Of course, we don’t recommend margarine for croissants, puff pastry, shortbread, crispy butter cookies or wherever the flavor of butter takes center stage. Turns out most of our favorite cookie recipes call for either transfat-free shortening (Hall-of-Achievement Chocolate Chip Oatmeal Cookies) or oil (Mighty Molasses Clove Cookies), so we can save the butter for where it really counts.

Do not substitute tub margarine.

Have you ever heard anyone say, “What this dish really needs is bay leaves”?

Nothing. Nobody will miss them.

“They” say we should buy small quantities of dry spices and toss them out after three or four years. (“They” are likely the McCormick Company.) Throwing out spices is costly, wasteful—and completely unnecessary. Buying large jars or bags at ethnic grocery stores or wholesale markets can save a ton of money, and your old spices never go bad and surprisingly keep their flavor. The USDA says that spices are shelf stable and won’t expire, although they may lose potency over time. Tell that to our pint jar of cayenne pepper, which is literally decades old and still so hot we still have to measure it by grains. Herbs also do not go bad, but they may lose their flavor more quickly than spices.

Look at buying spices as an investment. Store them in a cool place if you can, and close lids tightly keep them dry. And please don’t toss them until you’ve tasted them.

Taste tests and chemical equivalents prove that imitation vanilla has more of what we want from the vanilla bean: vanillin. See Chillin’ With Vanillin: How to Beat the High Cost of Vanilla. All vanillin, whether from a vanilla plant or a manufacturing plant, is identical: C8H8O3. It’s more than a flavor—it’s a spectacular flavor enhancer. And with the inexpensive alternative, we can double the amount specified in the recipe without feeling extravagant.

For uncooked dishes, where booziness might make a difference, add a touch of vodka.

Soup aisles are well stocked (pun intended) with cans and shelf-stable packages of broths ready to add to soups, stews and sauces. Save your shelf space with a more economical, tastier alternative: the good old bouillon cube. It adds depth of flavor and saltiness that’s easy to adjust according to taste. Good bouillon cubes work about as well as fancy soup bases that get spooned out of a jar, and they need no refrigeration. And there’s no need to lug home all that water.

Soups and stews that include meat and/or lots of vegetables make their own broth. So sometimes all we need to do is substitute water for broth and add just enough bouillon for flavor.

Reduce salt in recipe. Replace some or all of the broth with plain water in recipes including lots of meat or vegetables, then season with bouillon to taste.