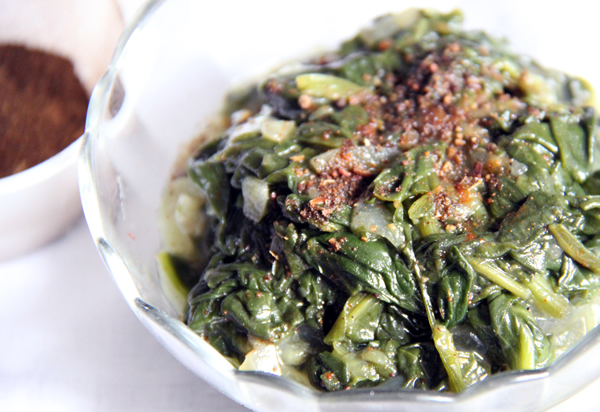 As we approach the Oscars, I propose a new category of Lifetime Achievement Award: “Best Actor & Cookbook Author.” The recipient would be an award-winning star of motion pictures as well as a best-selling cookbook author with James Beard honors. And, naturally, she or he would be a host of popular cooking shows.

And the winner is: Madhur Jaffrey.

I had no inkling of Jaffrey’s double life when my friend Wendy gave me her authoritative Indian Cooking cookbook 30 years ago. I had never even heard of her. But Wendy was a fan. She had just come back from living in Amsterdam, where she had watched Jaffrey’s BBC cooking show, and had picked up this companion book to the series. It has become my bible for foolproof Indian recipes.

This Spinach Cooked with Onions recipephany is a gem from that book. Bright, lively spices team up with tender spinach against a backdrop of oniony sweetness. Where would the world’s cuisines be without the beloved onion?

Last year I saw a trifle of a comedy called Today’s Special about a young man struggling to find his roots through Indian cooking. Madhur Jaffrey played his mother, showing a warmth and range far beyond what I would expect from a celebrity chef in a cameo role. I figured the casting director just got lucky.

But I was simply ill informed. This “Godmother of Indian Cooking,” author of more than a dozen cookbooks, seven-time James Beard award winner, and host of a groundbreaking BBC series, is first and foremost an actress.

Born in Delhi, India, she studied at the Royal Academy of Dramatic Art alongside Diana Rigg and Glenda Jackson. She’s been in 20 movies, including notable Merchant-Ivory films. In fact, she introduced Ismail Merchant to James Ivory, launching the legendary partnership that spawned a whole genre of gorgeous Oscar-winning costumed dramas (e.g., Howards End) featuring passion, tragedy, and the most desirable British actors available.

While at the RADA, she couldn’t stomach either the British or local Indian food. She begged her mother for her favorite childhood recipes, which she received in Hindi on onionskin paper via airmail. While she had never cooked before, she got great satisfaction mastering all kinds of traditional dishes. Her big break came when the New York Times food editor read a story she’d written for Holiday magazine about Indian home cooking.

While I’m curious about her acting, I’ll be binge-watching her old BBC cooking shows before I get to her old movies. One episode taught me how to make perfect paratha, so I’ll be trying more of her never-fail recipes.

Heat the oil or ghee in a very large pot (fresh spinach has enormous volume) over a medium-high flame. When hot, put in the onions. Stir and fry for 3 minutes. Add the green chili, ginger, salt, sugar and spinach. Stir and cook down the spinach for 5 minutes. Add ½ cup water and bring to a simmer. Cover, turn heat to low, and cook for about 10 minutes. Uncover and boil away some of the extra liquid, or just spoon out some liquid if there is too much. Sprinkle garam masala over the top and mix before serving. 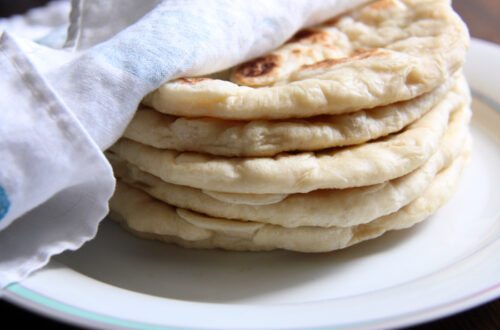 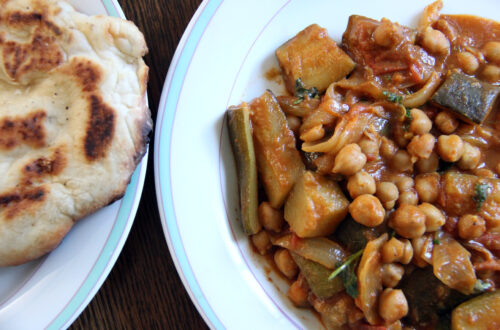 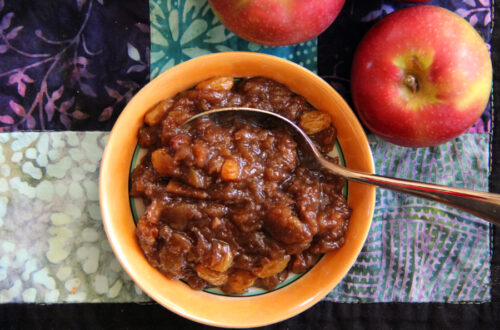