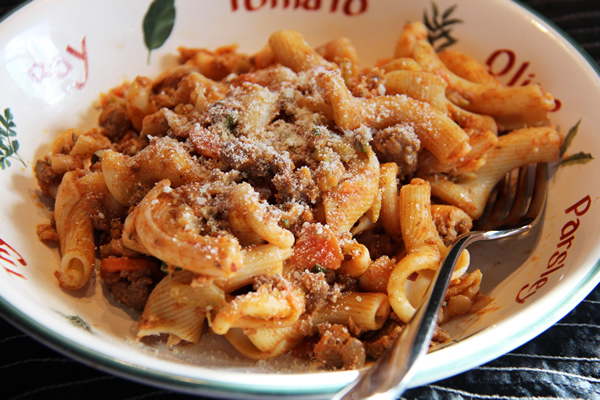 Dan calls it “faux-lognese,” that sea of tomato sauce with ground beef swimming in it. Real bolognese, Dan argues, is a ragù, or stew, of finely chopped aromatics and meats simmered with just a kiss of tomato paste, wine, and cream. And he knows because Ada Boni, the Mamma of Italian Cookbooks, said so.

Ada Boni captured authentic Italian cooking in the landmark  Il Talismano della Felicità, (Talisman of Happiness, or simply The Talisman) (1928) which became Italy’s standard cookbook for many decades, influencing generations of cooks. Boni’s Italian Regional Cooking (1969) has long been Dan’s go-to reference, as trusted as if it were written by his own Italian grandmother, Maria Rosa Nicoletta Maddalena De Stefano Discenza (or simply Nicoletta).

Over time, however, bolognese has transmuted into a red sauce. Even the biggest of culinary bigshots—Craig Claiborne, Marcella Hazan (touted as the gold standard), and even Lidia Bastianich—couldn’t leave well enough alone without saucing it up with tomatoes. Julia Moskin wrote in the New York Times that in a ragù, the meat melts into the sauce. I say it’s the other way around: the sauce melts into the meat.

One of my cookbook heroes, Myra Waldo, was a prolific travel and food writer who, like Boni, linked each dish to its regional cuisine. In Seven Wonders of the Cooking World she noted that Bologna cooks with both butter (generally used in the North) and olive oil (preferred in the South). She described her authentic bolognese as a ragù typical of a city that loves its fats.

And speaking of fats, chicken livers are the secret to over-the-top lushness. Like anchovies, they disappear into the background, adding a depth of flavor and richness that makes you smile but you can’t pin down. However, while I consider them essential, in Italy chicken livers appear to be no longer “de rigueur,” or rather, “de ragù.”*

The quantities here are for guidelines only. Adjust meat amounts and proportions to your taste, and go heavy on the aromatics if you are so inclined. It’s traditional to cook the sauce for an hour and a half, but we’ve found it cooks down nicely in only 45 minutes.

Dan usually serves bolognese on his homemade tagliatelle, but here we’ve used a hefty macaroni called gigli (or campanelle). Our neighborhood Stop & Shop sells its own imported gigli for a quarter of what you’d pay at Whole Foods, and it holds up well to the hearty bolognese.

For a bold, authentic ragù, don’t wimp out. Look these meats and fats squarely in the eye. You’ll be rewarded with the flavors Bologna originally had in mind, better than a faux-lognese even from Boston’s North End.

*NOTE, March 24, 2020:  Maribel Agullo teaches Italian cooking in Bologna (Taste of Italy). She informed me (see comment below) that the official recipe for Ragù alla Bolognese as registered with Bologna’s Chamber of Commerce does not include chicken livers, and Italians don’t use them anymore. For our follow-up in-depth story, see “Classic Ragù Bolognese Redux: Do Chicken Livers Deliver?”

Makes enough for 1 -1 ½ pounds of pasta. Serve with grated romano and/or parmesan.

Palmiers in a Pinch 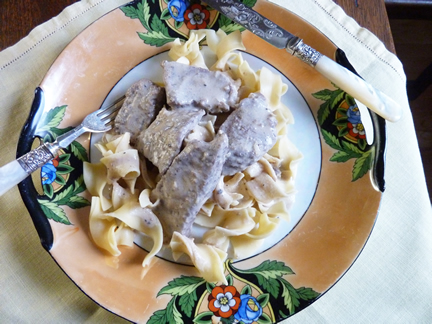 Beef Stroganoff: The Story of the Princess and the Recipe 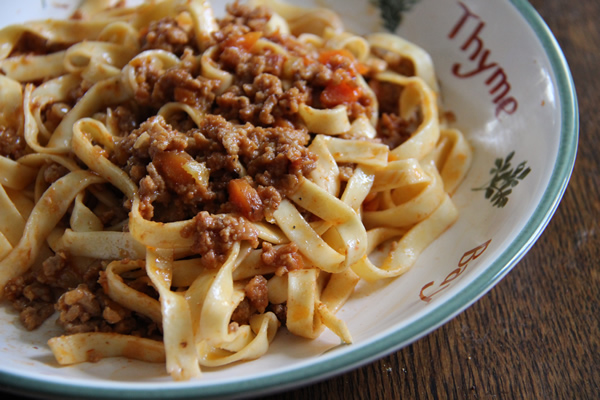 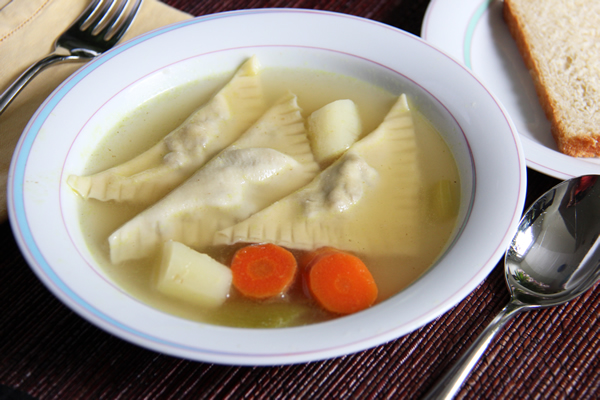